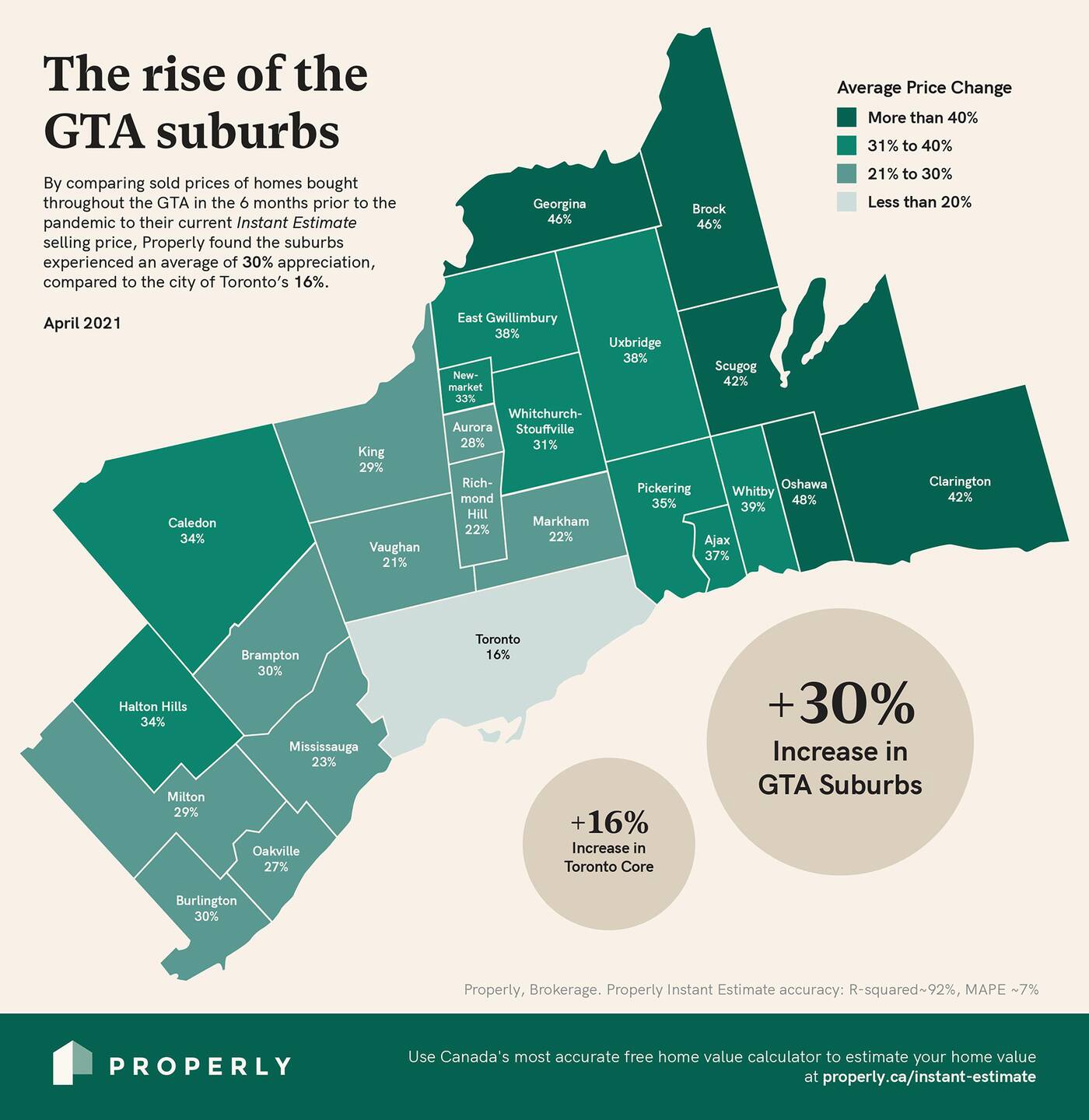 Who'd have ever thought, before the pandemic hit, that real estate in the 905 would one day be hotter than it is in Toronto?

As crazy as the thought would have seemed even one year ago, here we are, in a market that's been flipped on its head and across the entire GTA — in some cases to the great benefit of people who purchased homes in the suburbs prior to COVID.

A new piece of analysis from the high tech real estate brokerage Properly shows that people who bought homes in suburban areas of the GTA during the six-month period leading up to the health crisis have seen their investments increase far beyond their counterparts in the city.

That's not to say that prices have decreased anywhere in the region. On the contrary, they've increased literally everywhere thanks to a rush of demand amid supply shortages — just at a much faster rate in some pockets of the GTA than others.

Homebuyers who secured places in the City of Toronto between September of 2019 and February of 2020 have seen their investments appreciate, on average, by roughly 16 per cent, based on current home values for April of 2021 sourced through TRREB and calculated using Properly's new "Instant Estimate" tool.

Conversely, those who bought homes in other parts of the GTA over the same period of time have seen real estate values shoot up by an average of 30 per cent.

The greatest gains were seen in Oshawa, where home values rose a staggering 48 per cent in just over a year. Georgina and Brock both also saw surges, with home prices increasing by an average of 46 per cent in each market.

"Meanwhile, regions in closer proximity to Toronto, such as Vaughan (21%), Markham (22%), and Richmond Hill (22%), have seen weaker — but still impressive — appreciation," notes Properly.

To see it all laid out in a map, as the platform has conveniently done (see above), a clear pattern seems to emerge: The farther from downtown Toronto a suburb in the GTA is, the faster its home values have risen over the time period surveyed.

"Based on the continued realities of working from home and the desire for more space, people are relocating out of Toronto to the suburbs," notes Properly.

This urban exodus phenomenon has been blamed lately for price spikes all over the country and far beyond the GTA as young office workers flee their tiny downtown Toronto condos in search of cheaper, larger homes.

It's a trend that's expected to continue for a while, if polls are any indication, which should be good news (financially speaking) for current homeowners in small towns and cities who can sit back and watch their real estate investments soar to new and unexpected heights.